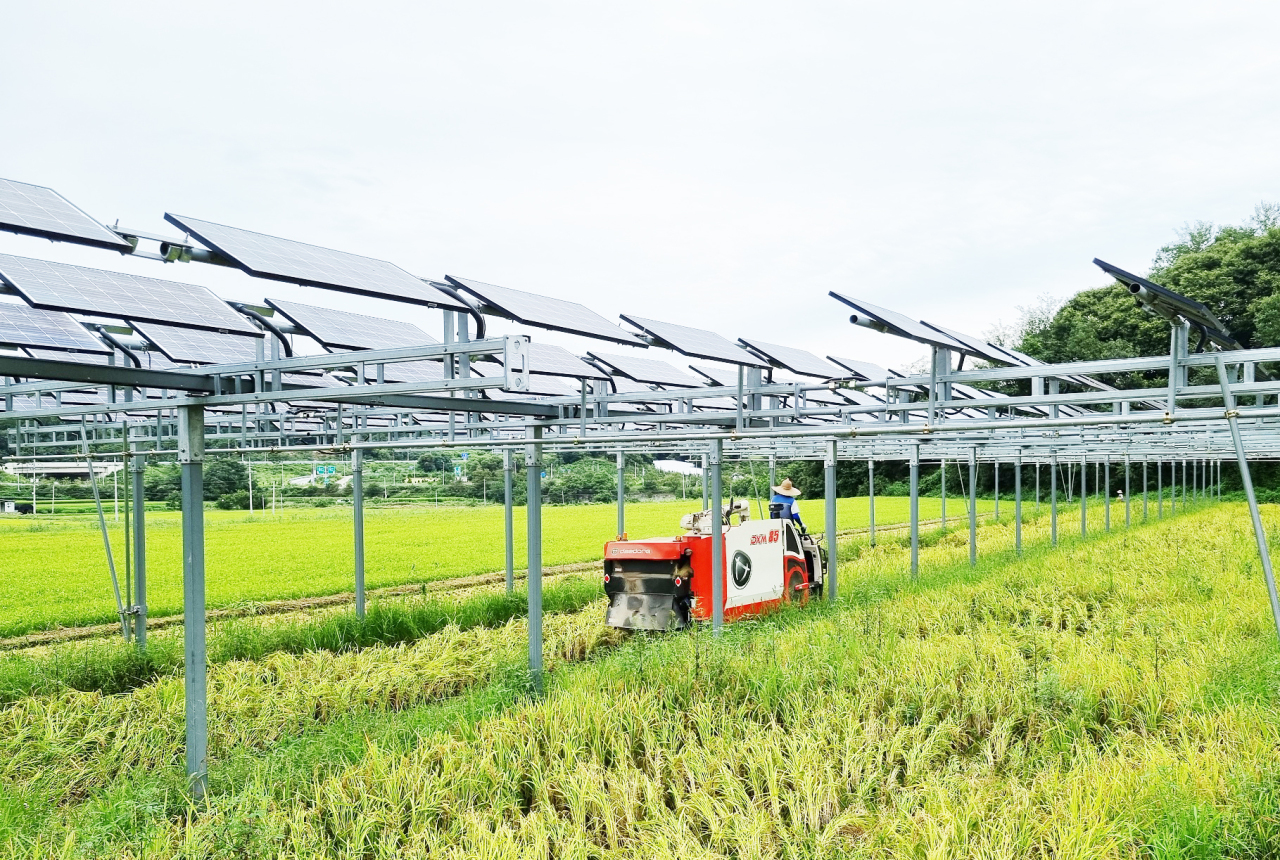 HAMYANG, South Gyeongsang Province – A week before Chuseok, the sounds of a combine harvester’s revving engine echoed in Gi-dong village of Hamyang, some 240 kilometers southeast of Seoul. The sound is not an unfamiliar one at any farm during harvest season around the country, but the scene was different as the machine cut and threshed grains underneath solar panels.

Sleek, rectangular panels are placed on poles five meters above the ground at an agrivoltaic demostration complex in the village. They create shade for farmers in the afternoon heat but they are erected for economic purposes.

“Agrivoltaic farms use light that is not necessary for crop growth to simultaneously generate electricity and produce crops,” said Lee Tae-sik, the head of the Gi-dong village social cooperative association.

Traditionally, the establishment of solar power generating sites often damaged or took away farming land. However, the coexistence of solar panels and farms now produce crops, prevent harm to the environment, and generate renewable energy to realize carbon neutrality.

“We are now at an age when just producing crops is no longer economically beneficial to farmers,” said Lee.

“South Korea is seeing a gradual exodus of its farmers from the agricultural business due to low economic returns. Agrivoltaic farms can work as an effective response to decreasing number of farmers in the country, as the land rental income or revenues collected from generating electricity, on top of benefits returned from crop production, will provide sufficient income for the farmers,” Lee said.

However, officials said there were public concerns over commercializing the newly rising type of farm, despite its advantages.

“Farmers’ concern with agrivoltaic farms is that they think the shadows cast by the solar panels will interfere with the growth of crops,” said Jung Jae-hak, a professor at Yeungnam University.

“However, this isn’t true, as crops have light saturation point at which supplemental lighting actually harms the crop’s photosynthesis. Solar panels placed over the crops here are accurately adjusted based on its size to supply the right amount of light to the type of crops growing underneath the panels,” said Jung.

Solar panels also work as protection for the crops during heat waves and rainstorms, according to Jung. They maintain humidity of the farming land by preventing extra water from evaporating.

Another obstacle to its commercialization are legal complications.

Under the current farmland act, temporary use of farmland for purposes other than crop production is limited to eight years. Solar panels, which have a lifespan of 25 years or more, must be removed only eight years after being constructed. This leads to a waste of expensive equipment and economic inefficiencies.

“Revision of the current farmland act must be reviewed by the National Assembly to accelerate the commercialization of agrivoltaic farms, as they are needed for the growth of country’s agricultural society,” said Jung.

“Nation-wide application of agrivoltaic farms will catch many birds with one stone,” said Yoo Jae-yeol, managing director at Hanwha Q Cell. “We will create modules suitable for agrivoltaic farms and put in efforts to combat climate change by achieving nationally determined contribution target with the modules.”

With prices up and labor scarce, technology becomes ‘essential’

Urban agriculture can have higher yields than rural farming