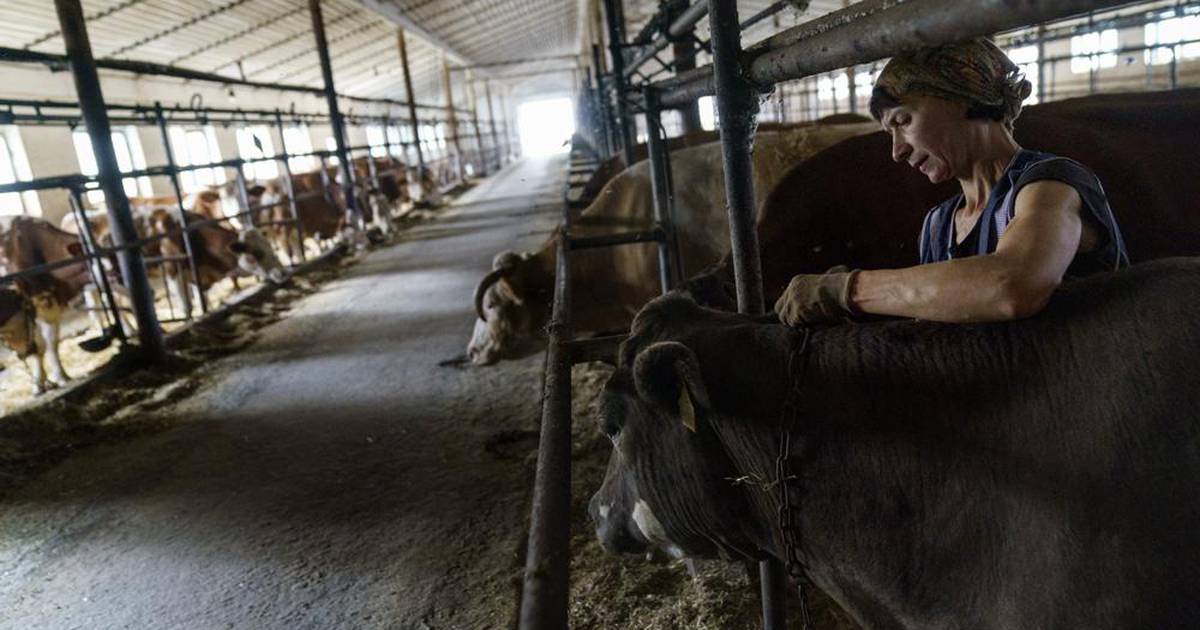 DMYTRIVKA, Ukraine (AP) — One of the last working dairy farms on Ukrainian-controlled territory in the eastern Donbas region is doing everything it can to stay afloat in a place where neither workers nor animals are safe from Russia’s devastating war.

Only around 200 head of cattle remain of the nearly 1,300 kept at the farm before Russia invaded Ukraine on Feb. 24.

The 8,000-acre farm, set amid rolling hills in embattled Donetsk province, is producing two tons of milk a day compared to 11 tons daily before the war, its managers say.

While a significant proportion of the KramAgroSvit farm’s revenues also once came from cultivating wheat, continuing that work comes with risks.

As a farm employee harvested wheat with a grain combine on Aug. 7, the machine hit two land mines, resulting in a fire that burned more than 60% of the worker’s body. The worker survived, but is in critical condition as doctors tend to an infection.

An inspection by an emergency services team found 19 additional mines in the field, said Ihor Kriuchenko, the farm’s senior livestock technician, adding that going out to harvest now is “very dangerous due to the shelling and mines.” Farmhands drive combines around visible artillery fragments to avoid them.

Such realities of war have created a cascading series of complications that coalesced to drive the farm’s business down dramatically.

Halyna Borysenko carries vacuum pumps to begin milking cows at the KramAgroSvit dairy farm. The farm is producing only two tons of milk per day now, compared to 11 tons before the war, and it’s slaughtered and sold all of the pigs and rabbits that it once raised. (AP photo/David Goldman)

In the nearby city of Kramatorsk, the provisional capital of Donetsk province, Russia’s attacks and a lack of gas for heating and cooking have caused most residents to evacuate, creating less demand for dairy products and, consequently, falling profits.

Business also took a hit as Russian forces captured several other cities where the farm had distributed its milk and those markets disappeared behind the front line.

Such conditions — disrupted demand and supply chains along with danger from shelling and mines — have made the prospect of farming in eastern Ukraine fraught with risks that threaten the future of the KramAgroSvit farm, which has been in business since 2003.

“This farm was hit (by a rocket), and 38 cows were killed, plus some of our farming equipment and vehicles were destroyed. Investors decided it was too risky to keep so many cows here, so they were sold abroad,” Kriuchenko said.

The farm’s owner had all the pigs and rabbits once raised there slaughtered and sold amid the uncertainty, he said.

Anna Lavrenyuk, general director of Ukraine’s Association of Milk Producers, said at the end of June that Ukrainian dairy farms lost at least 50,000 head of cattle worth an estimated $136 million during the first three months of the war.

Oleksandr Piatachenko sweeps hay at the KramAgroSvit dairy farm in eastern Ukraine. With many jobs lost as businesses shuttered, the region has become little more than a theater of war where only around a quarter of a million inhabitants have resisted the government’s pleas to evacuate. (AP photo/David Goldman)

Only around a third of the KramAgroSvit farm’s previous staff of 63 employees remains, Kriuchenko said, and revenues have dropped six-fold since Russian forces launched their offensive to seize the Donbas, an industrial region made up of Donetsk and neighboring Luhansk province.

One such worker, Nataliia Onatska, lined up around 50 cows side by side on Aug. 10 and attached vacuum pumps to their udders in one of the farm’s long, musty milking hangars. She’s spent her entire life on a farm and calls her job “the point of my life.”

“I wish everything was like it was before and everyone had kept their jobs,” Onatska said. “It’s scary to live now. I’m just living from day to day.”

The farm now feeds its wheat to the cows as grain prices have fallen and logistics costs have spiked, Kriuchenko said.

The crop wasn’t profitable on the market because of a Russian naval blockade of Ukraine’s Black Sea ports that a U.N.-brokered agreement is only now slowly remedying.

But of all the myriad challenges facing the farm, he said, the most difficult part has been saying goodbye to colleagues who had invested so much in its success. Amid the cutbacks, he said, he had to fire his wife.

“It was very hard and sad to let all our staff go. Our team was brought together from nothing, and there was great teamwork, everything was good,” he said. “It was a shock for me to say goodbye to them.”

As Halyna Borysenko, another worker in the dairy, finished milking the cows for the day, she said she pitied them for also having to live through the war.

“The animals are acting differently. They’re scared just like we are,” she said. “They just can’t say it out loud.”