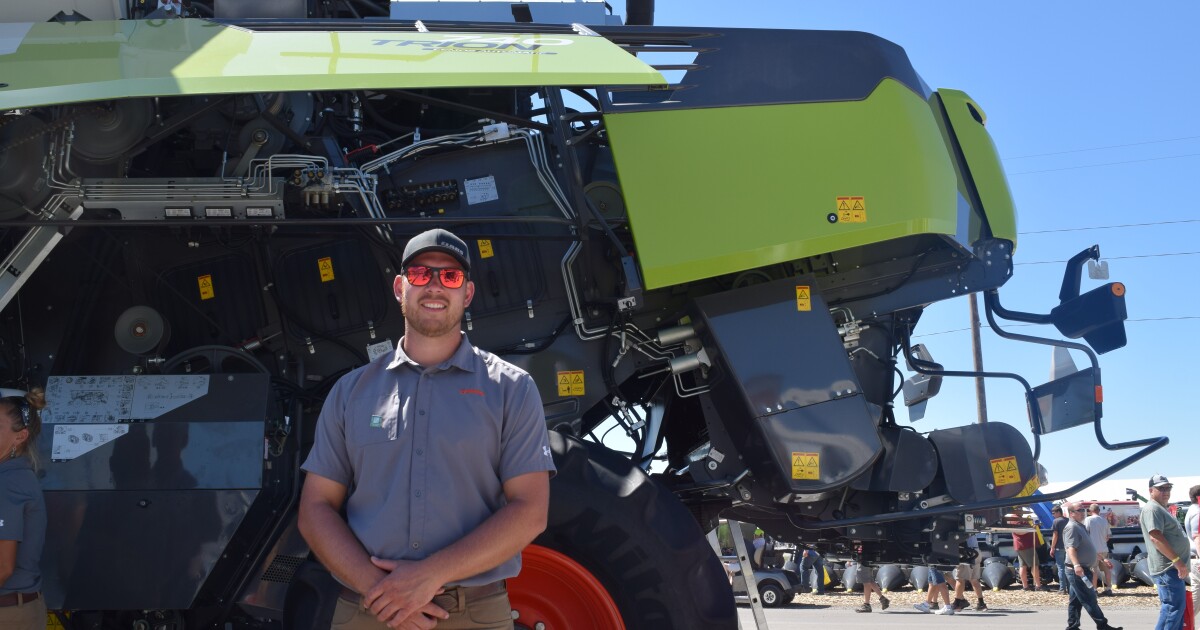 Farmers flocked to Boone, Iowa this week from all over the world for the Farm Progress Show.

Billed as the largest outdoor farm event in the nation, the three-day expo showcased hundreds of exhibitors touting the latest and greatest developments in agriculture. Yet while the show can make farmers feel like a kid in the candy store, this year they’re having to weigh their purchasing decisions carefully, as fuel and fertilizer costs remain high.

“A lot of it is things that you can afford in about 10 years or so,” said Adam Ledvina, with a laugh. “But it’s worth coming to see what’s happening and all the new ideas.”

Ledvina owns and operates a meat goat business in Chelsea, Iowa. He stood inside of the Varied Industries Tent — a tent with many smaller vendors — handing out individual popcorn bags to passers-by and promoting the use of cover crops for the organization Practical Farmers of Iowa. 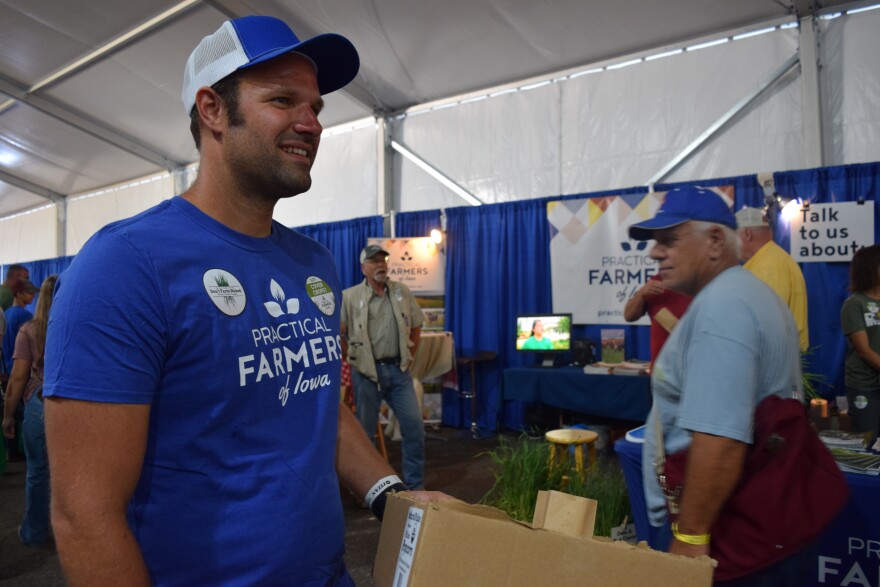 Adam Ledvina stands in the Varied Industries Tent at the Farm Progress Show in Iowa, passing out popcorn and promoting cover crops.

He also had time to check out the numerous offerings of the Farm Progress Show and look at livestock trailers. Ledvina said he wants to upgrade to a bigger one with more room to haul his goats around the state to manage forests and remove invasive species.

“All those different competitors are right close to each other,” he said. “You can really compare notes. It’s nice to kind of take a pen and paper, write down all the things and then go measure the other stuff and see exactly what you are after.”

Dan Hanson, who farms corn and soybeans near Fort Dodge, Iowa, looked at a strip till machine from the company Environmental Tillage Systems that could help minimize soil erosion while reducing the cost of fertilizer and fuel. Strip tillage is a form of conservation where producers plant and till in narrow rows.

“You have to limit what you can buy,” Hanson said, “but you’ve got to keep up to date on some of them because the future is changing. It’s always been changing in farming. You’ve got to look where your money would be best spent when you have a limited amount of money to spend.” 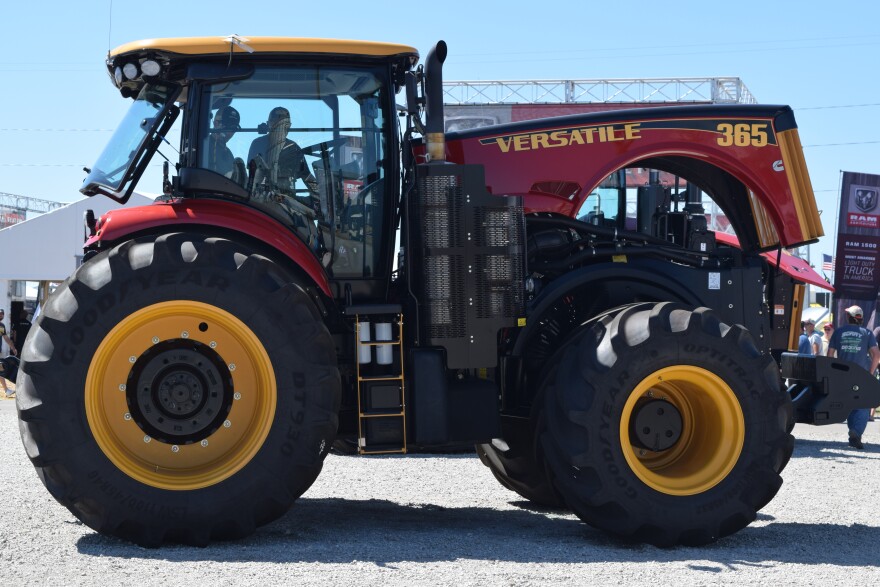 Farmers got to sit in and demo farm equipment, including this tractor, at the Farm Progress Show in Boone, Iowa.

While farmers deal with those challenges, some businesses said the high cost of inputs are what make them stand out as more competitive.

Caitlin Keck, the marketing director for Environmental Tillage Systems, said with fertilizer and other inputs being so expensive, it draws some customers to the products her company is selling. The Farm Progress Show, she said, is great for business and helps get her company’s brand name and strip tillage out there.

“Farmers are becoming more conscious of how to use things like fertilizer most efficiently,” Keck said, “and looking into options like strip tillage.”

The Farm Progress Show alternates annually between Boone, Iowa and Decatur, Illinois. It hadn’t been in Iowa since 2018 due to the coronavirus pandemic cancellation in 2020.

New equipment and technology weren’t the only things that generated buzz at the Farm Progress Show: Soybeans are paving the way for the future. 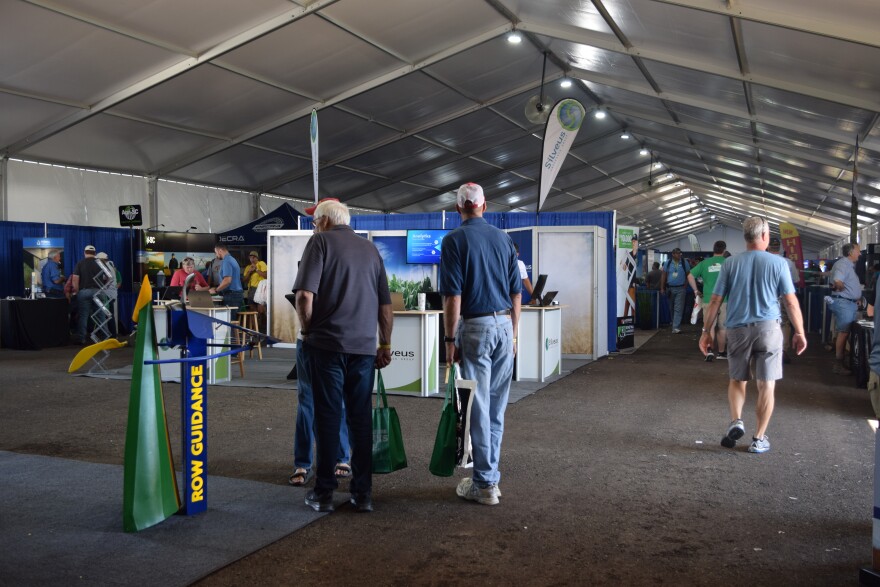 The floor of the Varied Industries Tent at the Farm Progress Show in Iowa is coated with recycled asphalt glued together by high oleic soybean oil.

This year, a partnership between the Iowa Soybean Association, Iowa State University, Central Iowa Expo and the Farm Progress Show laid down a nearly 43,000 square foot asphalt base on the floor of the Varied Industries Tent, which features about 150 exhibitors, including many small vendors.

“It’s very few times that we as farmers get to see where that end use is besides eating it,” said Robb Ewoldt, the president of the Iowa Soybean Association. “And here we get to walk on it. We get to show what we have done in the Midwest, to promote recyclable, environmentally-friendly practices.”

The technology is being tested in Alabama and could be used to coat rural roads in the future.

This story was produced in partnership with Harvest Public Media, a collaboration of public media newsrooms in the Midwest. It reports on food systems, agriculture and rural issues. Follow Harvest on Twitter: @HarvestPM